St. Christopher Episcopal Church was founded on September 15, 1957, as a mission in the Diocese of Dallas. Seven families met in a park on that day. The group decided to name the church St. Christopher, the patron saint of travelers.

As the newly named church planned to locate on Southwest Loop 820, this was appropriate as it meant a welcoming for all.

The first Eucharist was held the Sunday after the signing in the home of one of the founding members. The mission then moved to a country club ballroom and six months later made its home at Southwestern Baptist Theological Seminary for one year.

In 1958, the parish built its first building at the Southwest Loop 820 location. The mission became a parish in 1960 and in 1961, construction of the present church and church school buildings were completed. The original church building became the parish hall, office, nursery, and chapel in 1973. 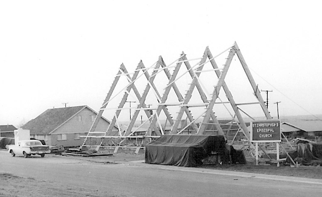 In late 1982 the western half of the Episcopal Diocese of Dallas became a new separate diocese that in early 1983 was named the Episcopal Diocese of Fort Worth. The new diocese included St. Christopher. In 1984, the church sanctuary was updated with the addition of a narthex, church parlor, and choir loft, which also houses the 1908 Pilcher pipe organ console and its 966 pipes.

As our membership grew and our outreach missions increased, we needed more space for our activities beyond our weekly services. In 2008, a capital campaign was launched for a major addition to the original building, and in February 2009 the Family Life Center was dedicated, with a catering-sized kitchen linking the Parish Hall to a multipurpose space of approximately 2300 sq. ft., handicap-accessible bathrooms and the St. Simon of Cyrene Chapel.

In 2019, the church sanctuary underwent a major revitalization, with new paint, carpet and tile, an upgraded sound system as well as brand new pews, pulpit, lectern and communion rail to invigorate our fellowship and welcome newcomers to a refreshing and comfortable place in which to praise God.

In April 2021, the members of our parish were forced out by a breakaway group that left the Episcopal Church over doctrinal issues. The dissension began with a bishop who practiced hate and division. He refused to ordain woman and he refused to accept LGBT folks. He rewrote the rules and convinced dozens of churches to break-away from the Episcopal Church.

For 12 years, the litigation over who owned all the church property wound its way through the courts. We won lower court rulings. But in 2020,  the Texas Supreme Court decided the breakaway group should get all of the $100 million worth of property, including our church.

We appealed to the U.S. Supreme Court. They declined to hear it. The decision was final.

With heavy hearts, we spent days packing, arranging movers and finding storage.  We fellowshipped, laughed and remembered all the good times -- the Easter egg hunts in the play yard, pancake suppers and Lenten gatherings.  Over the past year during the pandemic, we'd learned to worship virtually and bought equipment to make it happen. Just as we were beginning to have in-person services again, we were forced to leave.

We've chosen the way of love and acceptance over hate and bigotry. We have paid a heavy price. It is a price we would pay again.

For now, a Lutheran congregation nearby has offered to let us worship in their sanctuary. We are grateful to them for their hospitality and for welcoming us with open arms.